This is the classical and best-known route in Sudan.
This includes the mythical “Umbria” wreck and renowned reefs like Sanganeb or Sha’ab Rumi.
There we will dive with schools of barracudas, jackfish, sharks, among spectacular coral gardens and the famous and nostalgic remnants of the Pre-continent of Jacques Cousteau.
The rest of the dive sites will be in the Northern area of Suakin Archipelago. We will enjoy pristine coral reefs, with enormous fan corals, huge amounts of marine life and will look for the big game out there, white tip sharks, grey reef, hammerheads.

Day 1: PORT SUDAN: Upon arrival, immigration and baggage claim. Transfer to the port of Port Sudan. Boarding, welcome cocktail and presentation of the RED SEA BLUE FORCE 3 and the crew. Distribution of cabins. At the beginning of the cruise.

Day 8: PORT SUDAN: Arrival to Port Sudan and transfer to the airport. 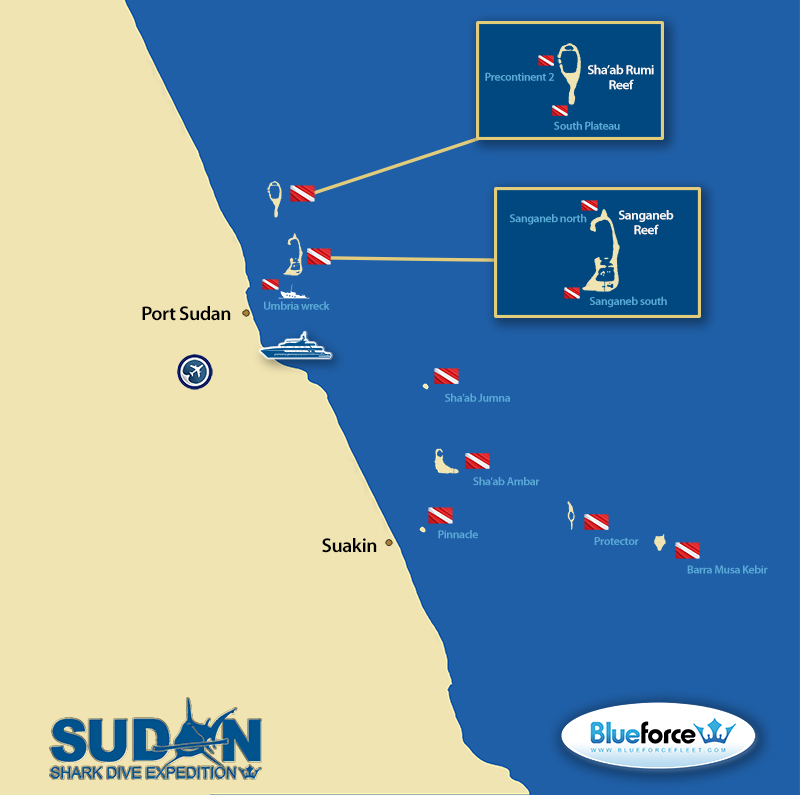 One of the best wrecks from WWII, with a huge array of cargo still intact in its holds. Sanganeb Reef:  Barracudas, jackfish, grey reef sharks, bumphead parrotfish and even encounters with hammerheads. Sha’ab Rumi: Very long reef with a famous lagoon where we can find the remains of Jacques Cousteau Precontinent II program as well as an amazing plateau with grey reef sharks cleaning stations and one of the best places to spot the shy hammerhead sharks.

In the northern area of Sudan, we will dive Angarosh Reef: named after the number of sharks in the old times and where we can usually spot groups of hammerhead sharks, barracudas, and jackfish next to the incredible walls and whip coral gardens. Abington Reef: vertical walls covered with corals Merlo: Whitetip reef sharks, big tunas and even grey reef sharks and hammerheads along a wonderful wall covered with soft corals.

Wreck “Umbria”: One of the best wrecks in the world. It was scuttled by her captain at the beginning of the Second World War. Still preserves almost intact its military cargo and hosts a large number of marine life. The wreck is easy to dive due to the depth (between 5 and 33 meters) and the virtual absence of currents. The exploration of the wreck represents a real adventure for divers.

The wreck is 150 mts long and is covered with corals, boasting a huge amount of marine life like snappers, sweet lips, butterflies, barracudas…

Located 15 miles NE of Port Sudan, this reef is marked with a beacon of the Victorian era at its southern tip. We can find different dive sites here. The north side is exposed to prevailing winds and currents and can be dived only with calm seas and preferably in the early hours of the morning. Mantas can be seen here and if you are lucky, you might find small groups of hammerhead sharks patrolling the blue.

The south side offers a plateau with some coral blocks and a lot of barracudas, schools of unicornfish, sweet lips and much more. There is a small sand area on the southwestern tip., where we will find white tip sharks.

In the north part of the plateau, we will find a steep drop off where grey reef sharks, hammerheads and even silver tips cruise by.

This huge barrier reef is located about 20 miles NE of Port Sudan. It forms a true coral garden and cleaning station for some pelagic species. On the west side, there are two openings that allow entrance to the interior lagoon. Just outside the entrance of the lagoon, we will find the remains of the Pre-continent II, the underwater “village” built by the team of Jacques Cousteau in 1963. The southern area of the reef is more dynamic as two different currents bring nutrients from the deep. This attracts large schools of fish as well as different species of sharks that patrol the boundaries of the reef. With some luck, we will also spot groups of large Bumphead Parrotfish.

Suakin archipelago is located in the southern area of Port Sudan. It is composed of hundreds of islets and coral reefs. Among the various points of this archipelago: Sha’ab Amber, Sha’ab Jumna, Pinnacle, Logan, Seil’Ada, Hindi Cider, Protector and Preserver Reef.

Is the reef located more to the north of Suakin. It has a length of more than 5 miles and offers some openings to an interior lagoon that offer an excellent refuge to the ships. It is easy to find hammerhead sharks, grey reef and white tip and occasionally, silver tip.

At its outer wall, to a depth of 30 meters, there is a large cavity that offers excellent views of the outer wall with resident sharks, tuna and carangids.

Long Reef located 8 miles south of Sha’ab Jumna. Also offers an interior lagoon that gives shelter to the ships. In the southern area of the reef is a sandy platformat 25 meters, ideal to enjoy encounters with hammerhead sharks, grey sharks.

Located 9 miles south of Sha’ab Jumna, this reef takes the form of a pinnacle that rises from the depths. It offers a rich and varied concentration of reef fish in the areas most influenced by the currents.

Reef located 18 miles east of Sha’ab Amber. It is two miles long, encircling a large lagoon. Its southern end offers dives to depths of 20 meters full of corals and abundant life. In the deep waters of the outer wall of the southern tip, it is easy to find hammerhead sharks, silky and mantas.

Reef located 7 miles east of Sha’ab Amber. The north face is the one that offers the greatest chance of encounters with hammerhead sharks, silky, white tip and grey reef and large concentrations of hump head parrot fish. Occasionally there can also be found mantas. The east and west sides of the reef are home to a wide variety of corals and sea fans.

IMPORTANT: Cruise only recommended for advanced divers and with some experience.