How to choose the best diving suit

The Red Sea and the Maldives are the Blue Force Fleet cruises destinations and are among the most popular for divers planning a dive trip. One of the most common questions when starting to pack is what diving suit should I take? Despite being both tropical destinations, we should not assume that the water will be too warm because depending on the area we choose and the time of year we can get a surprise. So let’s see how to choose, without fear of being wrong, the suit that we should pack in our suitcase

What diving suit should I take? 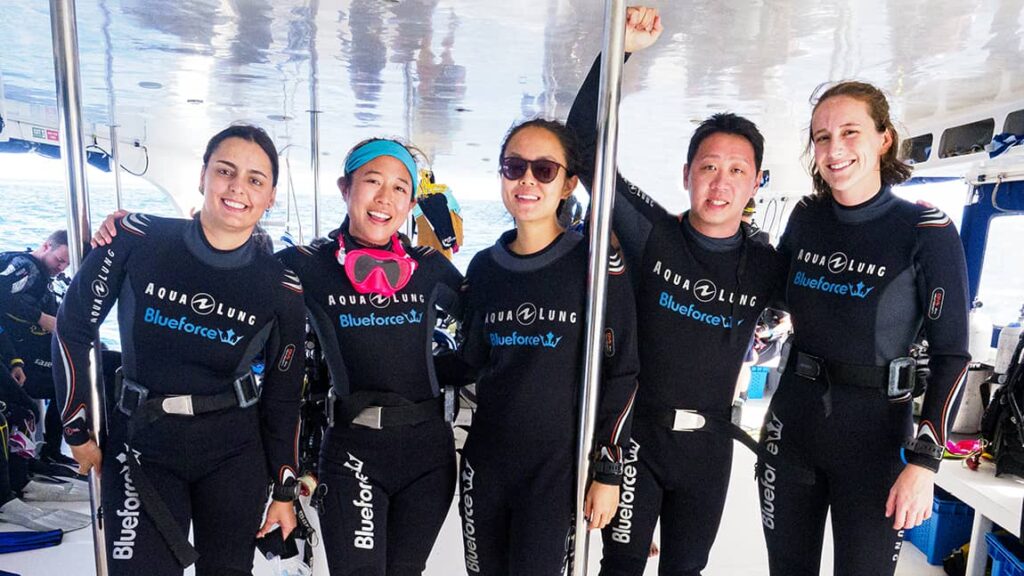 Many divers think that a shorty or a lycra is enough to dive in a tropical destination but the reality is that we should consider this premise in more detail if we do not want to spoil the holidays even before starting. Let’s review the diving suits features to define which one we should take to the Blue Force destinations.

What is a diving suit made of?

Neoprene is the most used material in the manufacture of wetsuits. This material is a closed-cell foam that traps millions of tiny gas bubbles within its structure. This foam is usually protected with a layer of elastic tissue (normally nylon or lycra) on each side, as a sandwich. This gives structural resistance to neoprene and allow the manufacture to sew the join areas. Unlike open cell foam (a sponge), neoprene does not let water pass through it. So if the suit fits us well in the entry areas (cuffs, ankles, neck …), even if the water enters at the first time, it will not circulate. This creates a small sheet that the body itself will heat up and that the neoprene, as an insulator, will prevent it from cooling down. The neoprene gas bubbles, while isolating us from the environment, tend to give the suit a lot of buoyancy. That’s an additional reason why we must weight ourselves to dive. Neoprene can be classified into several categories according to its thickness, its elasticity, its thermal protection capacity, its buoyancy, etc.
Nowadays, most of diving wetsuits use similar neoprene that combine some of the most suitable characteristics for that activity. The choice depends much more on how well the suit fits and how comfortable it is than on the type of neoprene. 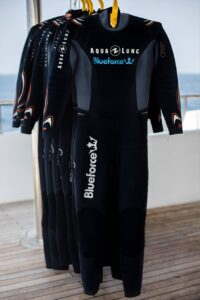 How to choose a diving suit?

Here are some facts to consider when choosing a suit:

The diving suit should not be too baggy or too tight. If it doesn’t fit us well, the water will circulate between the exterior and the interior while we dive, so it loses efficiency in its thermal protection. On the other hand, if the diving suit is too tight, it can generate problems such as obstruction of blood circulation, difficulty on breathing or friction on the skin. The right wetsuit should fit you perfectly, like a second skin, but not tight. We must also bear in mind that wetsuits tend to feel tighter when dry than underwater. With time and use, suits loose thickness mostly in areas where they are subjected to the greatest pressure, such as the joints. 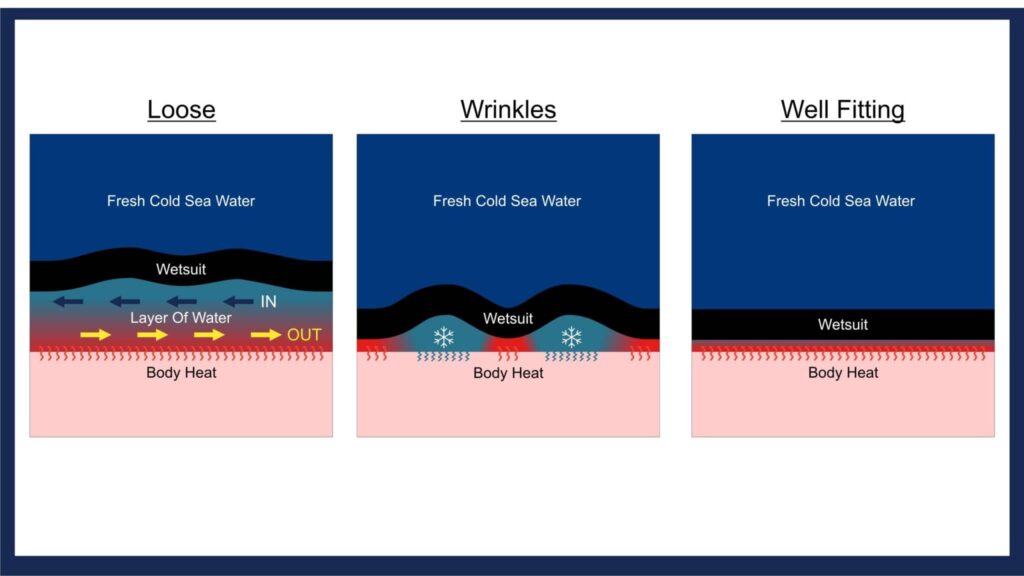 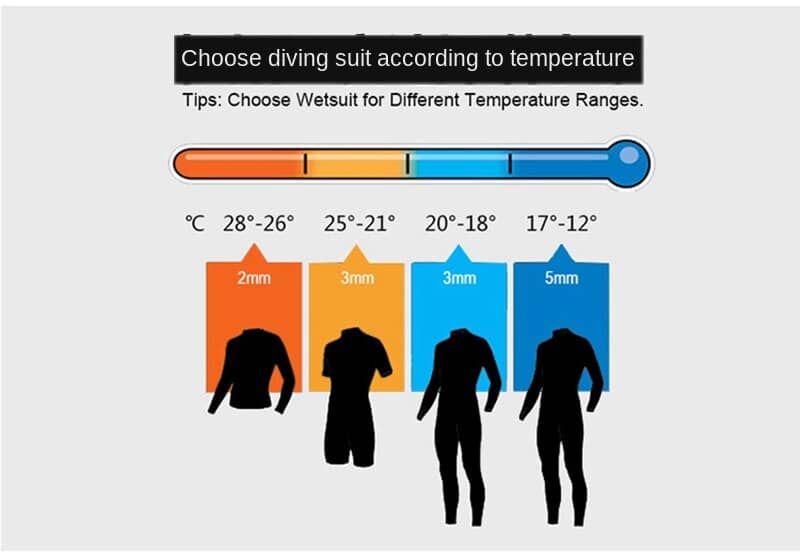 The thicker the diving suit, the more it will protect us from the cold. Neoprene creates an insulating layer between water and our skin, in turn our body heats the thin sheet of water between our skin and the neoprene. Some suits use differentiated thicknesses according to the body areas: being thinner in the arms and legs, to make movements easier, and thicker in the chest and back area, to increase thermal protection. As a general rule, the thinner the suit, the more flexibility of movement it will have, but the less isolating it will be. The buoyancy of a diving suit is also directly linked to its thickness: greater thickness, more buoyancy, and more ballast we will need. As a general rule, 3mm diving suits are usually used in the tropics, with waters between 26ºC and 30ºC. The 5mm wetsuits are ideal for waters between 22ºC and 27ºC. Those of 7 mm are usually used for waters between 18ºC and 22ºC. Although this may vary according to our perception of the cold.

Shorty, full one-piece, double-piece, semi-dry and dry are the most common types. Nowadays, most diving suits are usually one-piece and use zippers to dress it easily. The zipper is usually a point of water circulation. In warm waters, the zipper is not usually a serious problem, but if we dive in cold waters, a suit with a dry zipper is recommended. The double-piece diving suits are the most used among free divers, they do not have a zipper, so they are more flexible, comfortable and have less water circulation, so they offer better thermal protection at the same thickness but it is not so easy to put them on. 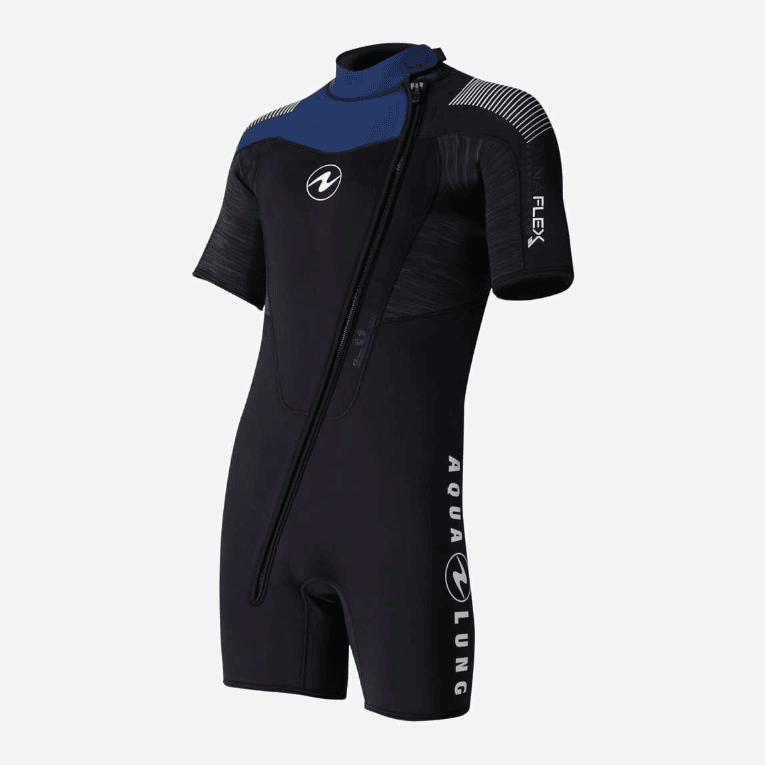 When choosing a diving suit we must pay attention to details such as the pattern: it should seal well in critical areas such as cuffs, ankles and neck: should include reinforced patches in critical areas such as knees, elbows, shoulders, etc.. . The pattern is one of the most important factors as it directly influences comfort. Not many years ago, the diving suits were shapeless and fitted everyone: women, men, old or young. Today there is a lot of variety depending on the type of body and even, if necessary, we can find some companies which produce made to measure suits. Some manufacturers even offer a wide variety of sizes, in height and width, that should fit everyone’s morphology.

What diving suit should I take to the Red Sea? 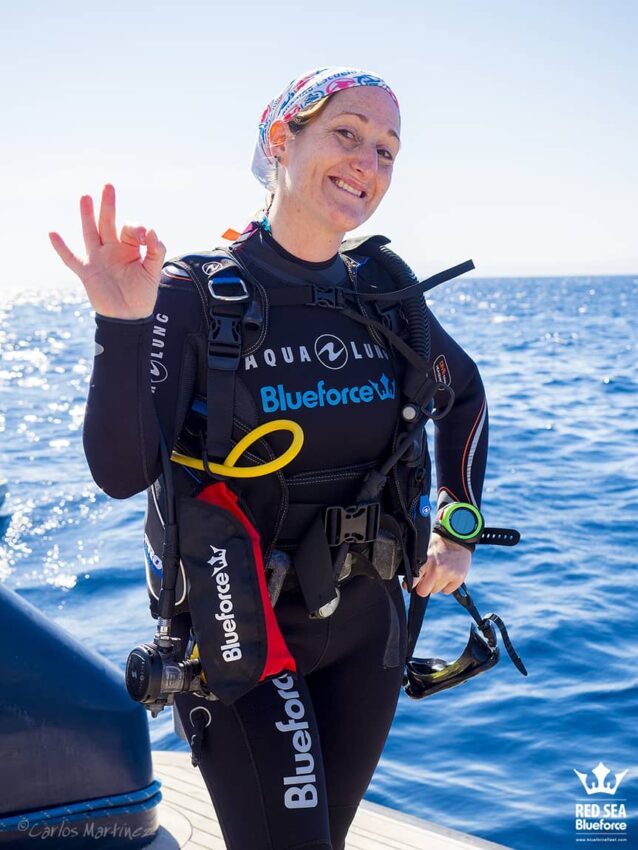 The Red Sea is a narrow and elongated portion of sea that separates Asia from Africa. In its southern slope, joins the Indian Ocean by the small Strait of Bab el Mandeb while, in the north, it joins the Mediterranean by the Suez Chanel, a 163 km long passage created in the mid-19th century to shorten of ships from Asia to Europe. With 2,250 km length, it is only 430 km wide and reaches 3,040 m at its deepest point. It is a unique ecosystem that has its own peculiarities. In some areas the sea water can oscillate 7-8º between the coldest month (February) and the warmest (August). We must also take into account the area where we are going to dive, it is not the same to dive in Ras Muhammad (north) than to do it on the Sudanese coast (south), the waters are usually between 2 and 4ºC higher throughout the year. If we decide to dive in the colder months, we can find waters around 18-19ºC in the extreme north, around 20-22ºC in the central area, for example in Hurghada, and around 23-25ºC in Sudan. While in August the temperature ranges from 28ºC in the north to 30-32ºC in the south. These temperatures are usually measured near the surface, so it is usual to find somewhat cooler waters, between 1 and 3ºC, beyond 15-20m depth, especially in summer. So the Red Sea, despite being a tropical destination, it has a moderately hot temperature and in the winter months we may need a little more thermal protection. In our Red Sea Blue Force 2, we have a complete variety of new diving equipment for rent. Our rental suits are one-piece 5 mm from AQUALUNG and we have several sizes available for both women and men.

What diving suit should I take to the Maldives?

Located in the middle of the Indian Ocean, the country of the thousand islands, it is very close to the Equator and the temperatures are more homogeneous than in the Red Sea throughout the year. The water in the Maldives is warm, with an average of 29ºC, it can rise to 30ºC in late April and early May, at the beginning of the monsoon. In channel dives, especially during the incoming tide, we come through slightly cooler water than when diving in “thilas”, coral mountains within the atolls. But the temperature difference is not huge, being rare that it exceeds 2ºC between one place and another. We can also find variations at a certain depth, which are known as “thermoclines”, but they are also very slight variations. In general, we can consider diving in the Maldives as a tropical dive and a 3 mm suit should be enough, or even something thinner. On our boats,  the Maldives Blue Force One, and the Maldives Blue Force 3, we have a complete variety of new diving equipment for rent. Our rental suits are one-piece 3 mm from AQUALUNG and we have several sizes available for both women and men. 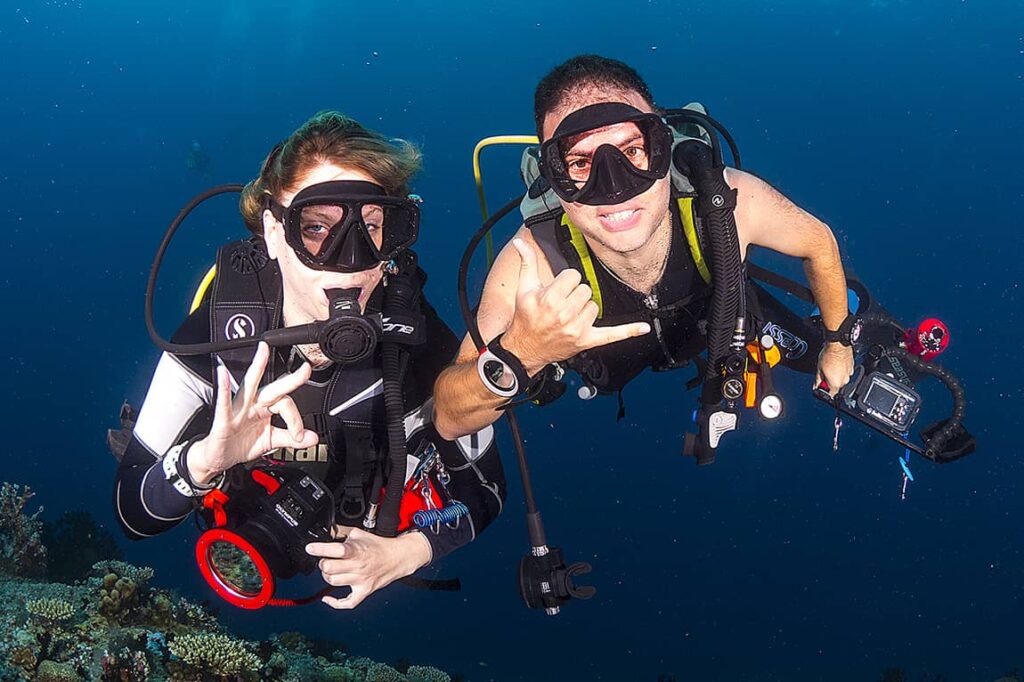 Temperature is a precise and easily measurable fact, but our perception of it is totally subjective. So it depends on how each one copes with cold and heat. The perception of heat is related with our physiognomy, our biorhythms, our tolerance to heat and cold, and even our mood … In addition, in a trip of a week or ten days, this perception can change: doing an average of 3 to 4 dives per day it is possible that our heat loss accelerates with the trip progression. For this reason, it is better to be conservative than too much optimistic by wearing a very thin diving suit. 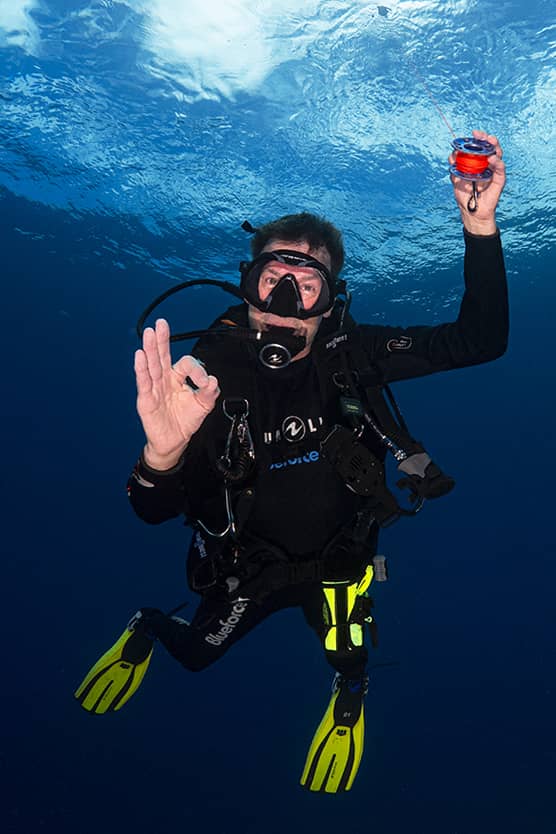 The balance between physical comfort and thermal comfort will give us the perfect recipe to choose the right diving suit. Diving every day, on a lifeaboard trip is such an unforgettable experience that, on many occasions, you do not think and such a basic question as water temperature. The best option to take your decision to travel to the Red Sea and the Maldives is to trust on Blue Force Fleet to design the perfect route and choose the best time to fullfill your expectations. Once the decision is made, ask us for advice on the right gear, or even allow us to recommend you to rent the best one kit on our boats.