Super complete and varied route in which all dive spots are world-famous and the best of Red Sea. This is Top Red Sea Route.

What to expect from the Top Red Sea route?

One week dive in places such as the National Park of Ras Mohamed and the Brothers Islands in search of pelagic fish, mythic & spectacular wrecks as the Thistlegorm & the Salem Express and walls such as Abu Kifan and Panorama Reef in Safaga guarantee an excellent dive week.

Day 2º to 7º (Sunday to Friday) DIVING CRUISE “TOP RED SEA” ROUTE: diving cruise on a full board basis (including water . 3 meals) and daily plan of dives. The most prominent diving points will be Big Brother, Small Brother, Ras Mohamed, SS Thistlegorm, Salem Express and Safaga Reefs. (Due to the outer island regulations night dives are forbidden).
Friday afternoon/evening, arrival at port. Dinner and overnight on board.

Day 8 (Saturday) HURGHADA OR PORT GHALEB: Disembark in Port Ghaleb or Hurghada. Transfer to the hotel in Hurghada. Day of rest to remove residual nitrogen. Free time to enjoy the local environment, shopping and/or optional tours in the area. Dinner and overnight at the hotel.  Lunch not included 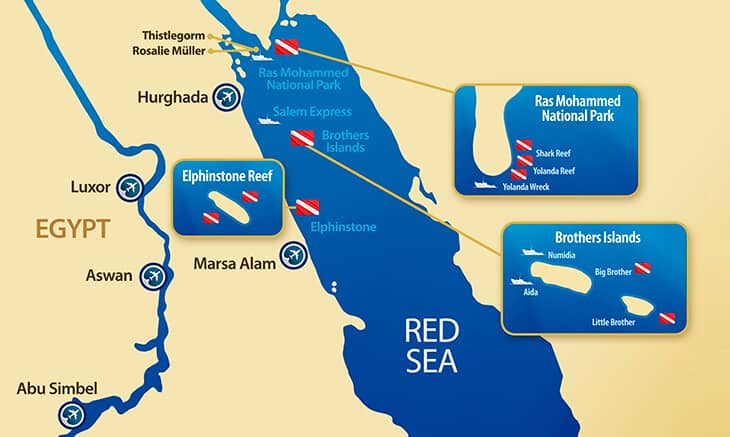 The smaller of the Brothers islands, just 100 meters in length, offers some of the best dives in the Red Sea. The north western corner, swept by strong currents, is a kaleidoscope of corals of all kinds in addition to being the meeting area of hammerhead sharks, thresher and large tuna.
Drifting along the impressive vertical walls of this reef is a feeling that is difficult to forget.
On the eastern wall, you will find a spectacular gorgonian forest starting at 25 meters, sinking into the abyss. Under the mooring of the boats, in the southern area of the island, we can have a surprise visit with the curious oceanic white tip sharks (Carcharinus Longimanus).

The largest of the Brothers, crowned by a light house of the victorian era (1880), offers an excellent wall diving and wrecks. The Numidia’s wreck is located on the north wall of the island between 12 and 75 meters depth. Sunk in 1901, it is constantly swept by currents, which has made it completely covered with corals. It is quite common to find grey reef sharks patrolling around the wreck and groups of large tuna hunting in the area. On the other side of the island, we find the Aida’s wreck, sunk in 1956, although it is of little interest to recreational divers due to its depth.
The southern area of the island has a platform that starts about 28 meters and extends into the depths with its walls completely covered with soft corals, whip corals and enormous trees of black coral. It is quite common to find the elusive thresher shark if the currents allow to dive here, as well as several napoleon Wrasse.

The best “wall” dive in the Safaga area. Is a long reef, similar than Elphinstone and about 300m long and dropping down, very fast, to the deep. Lot of soft and hard corals, huge gorgonians and trees of black coral. We use to see turtles, jacks, barracudas and other big pelagic animals.