With the broad experience acquired week after week in the Red Sea by the Blue Force team, we offer the “ELPHINSTONE, BROTHERS & SALEM EXPRESS” DIVE ROUTE. ( aka EBS)
An intense week of liveaboard safari in a super complete and varied route full of world-famous and best of Red Sea. On this route, we will visit the astonishing walls of Elphinstone to later focus on the Brothers Islands (Small Brother or Big Brother), with its vast walls where there is higher possibility to find pelagic fish, thresher sharks, oceanic sharks, hammerheads, gray sharks as well as gorgonian woods. Then, the obliged visit to Numidia wreck, completely colonized by soft coral. In the area of Safaga we will enjoy the reefs in Panorama Reef, Abu Kifan & the dreadful and awesome wreck Salem Express.

A great opportunity to live a fascinating and entertaining Great Dive Trip.

Day 2º to 7º (Sunday to Friday) DIVING CRUISE “ELPHINSTONE, BROTHERS & SALEM EXPRESS” ROUTE: diving cruise on a full board basis (including water. 3 meals) and daily plan of dives. The most prominent diving points will be Elphinstone, Big Brother, Small Brother and Salem Express. (Due to the outer islands regulation night dives are forbidden).
Friday afternoon/evening, arrival at port. Dinner and overnight on board.

Day 8 (Saturday) HURGHADA OR PORT GHALEB: Disembark in Port Ghaleb or Hurghada. Transfer to the hotel in Hurghada. Day of rest to remove residual nitrogen. Free time to enjoy the local environment, shopping and/or optional tours in the area. Dinner and overnight at the hotel 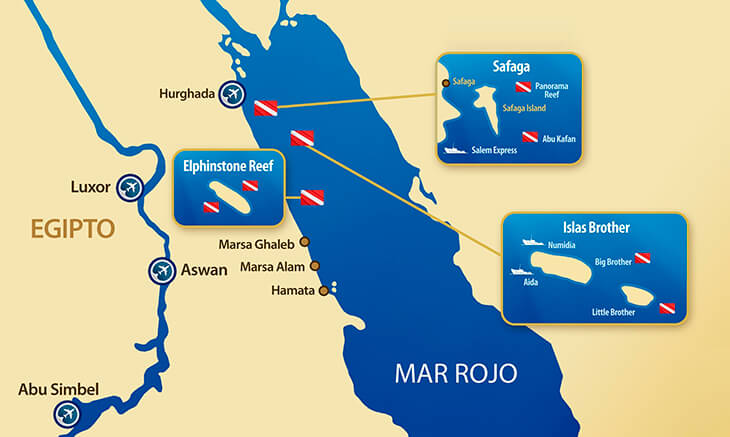 The smaller of the Brothers islands, just 100 meters in length, offers some of the best dives in the Red Sea. The north western corner, swept by strong currents, is a kaleidoscope of corals of all kinds in addition to being the meeting area of hammerhead sharks, thresher and large tuna. Drifting along the impressive vertical walls of this reef is a feeling that is difficult to forget. On the eastern wall, you will find a spectacular gorgonian forest starting at 25 meters, sinking into the abyss. Under the mooring of the boats, in the southern area of the island, we can have a surprise visit with the curious oceanic white tip sharks (Carcharinus Longimanus).

The largest of the Brothers, crowned by a light house of the victorian era (1880), offers an excellent wall diving and wrecks. The Numidia’s wreck is located on the north wall of the island between 12 and 75 meters depth. Sunk in 1901, it is constantly swept by currents, which has made it completely covered with corals. It is quite common to find grey reef sharks patrolling around the wreck and groups of large tuna hunting in the area. On the other side of the island, we find the Aida’s wreck, sunk in 1956, although it is of little interest to recreational divers due to its depth.

Very close to Marsa Alam we will find this well-known reef, famous for its currents, the quality of the corals that cover their spectacular walls and by the encounters with all kinds of pelagic fauna. It extends from north to south, parallel to the coast and its walls go down to more than 90 meters of depth. In its upper part, large heads of hard coral house an abundance of small anthias that we appreciate during the safety stops. In the platform of the northern tip, where the currents can be very strong, the sea will have always some surprise. Next to huge resident napoleon wrasses and giant gorgonians, we shall wait for the possible visits of hammerhead sharks, mantas, grey reef sharks, barracudas, tunas and maybe some more surprises. But the best part of Elphinstone is to be able to enjoy its spectacular multi-colored walls, drifting along with the currents while enjoying one of the best coral reefs of the Red Sea.